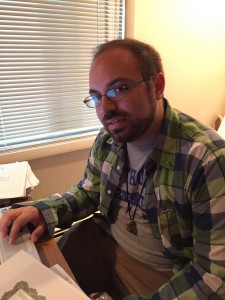 Gifts from the Autistic Community: A Guide to Giving and Receiving.

Bronx, June 14, 2016 (Newswire.com) - ​​Author Anthony Pappas recently published his first book that gives a genuine and authentic view on what it is like to work with individuals with Autism and developmental disabilities.

It provides insight through the lens of the worker, the parents, and the individuals being supported. Pappas gives in-depth detail how working with the people with Autism has inspired him to love others and follow his own dreams and passions.

"I want to give a voice to individuals with developmental disabilities and inspire people who work with this population."

Pappas recalls how challenging it was when he began working as an At Home Counselor. He stated, “I walked into the job actually knowing nothing about Autism. So I had to improvise and learn from experience. I would say patience is the most important tool you can have working in this field.” He added, “There is no manual for Autism, but someone who picks up this book may have a little more of ahead start than I did.”

He believes that working in the home of an individual with a disability requires teamwork from all parties involved. Pappas describes this as a “Trifecta”, which is the parent, worker, and the individual receiving services to be on the same page.

Pappas soon discovered that working in this field would inspire him to follow his own dreams. “The first person I worked with really loved music and I didn’t know how to communicate with him because he is non-verbal.” He added, “One day I bought in my guitar to work. I knew a couple of chords so we would sit on the couch and I would play for him. He would not let me stop playing. He would tap me as a reminder to keep playing. Instead of playing for ten minutes and getting bored, I would play for an hour, so it really affected my self-discipline,” said Pappas.

Shortly after this during his free time at home, Pappas would begin practicing playing the guitar and writing songs lyrics. He stated, “I didn’t realize how creative I could be. Over the course of six and a half years, I have become a much more confident individual, and I really attribute that to the hearts and minds of the people that I work with.”

During this time Pappas rediscovered his love for writing. He stated, “I had written several works of fiction, but I really wanted to tie in writing with my job because these are my two greatest strengths and passion”. He added, “It was easy for me to write because it was my story and flowed out of me.”

When asked why he wanted to write this book, Pappas stated, “I want to give a voice to individuals with developmental disabilities and inspire people who work with this population.”  He added some encouragement to the parents of these individuals stating, “I think that a parent who brings one of these special people into the world just has such an opportunity for personal growth and constant blessings from God.”

Pappas described how he came up with the title of this book. He stated, “Gifts from the Autistic Community, comes from these individuals helping me to find myself, my passion, and my calling. That was a gift from them.”

Pappas reflects on his years of being a Community Habilitation Counselor stating, “I have never experienced anything more rewarding in my life than knowing that I have done good work with a special needs person.”

Gifts from the Autistic Community: A Guide to Giving and Receiving is currently available on Amazon by clicking here or can be purchased using the Amazon Kindle app.