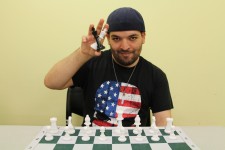 Chronopoulos participated in the Summer 2016 Chess lecture and Simul Series at the Chess and Checkers House in Central Park. In these Simul series a Grandmaster or expert chess player will play up to 30 people at the same time.

"Chess is a power struggle between two opponents."

Chronopoulos, who has been an avid chess player since 2008, described how he discovered this event stating, “My mentor who taught me how to play, presented me with an opportunity to challenge myself and play against Grandmasters.” He added, “At first I was a little nervous but I enjoy taking on new challenges.”

On Saturday, June 18th, Chronopoulos played against Georgian International Master and Woman Grandmaster Rusudan Goletiani. He discussed his preparation stating, “I prepared for this match by playing numerous chess games online.” He added, “I practiced on websites such as chesscube.com and chess.com, playing against people from all over the world.”

Just before the match Chronopoulos stated, “I was very nervous going into the match with Rusudan because I didn’t know the outcome, but I said let me just play my best and see what happens.” He added, “During the match I was having fun but I was focused on trying to win. Chess is a power struggle between two opponents.”

Chronopoulos fought valiantly against Goletiani, but resigned after 23 moves.

After the match he remained optimistic stating, “I had fun playing, and I am okay with losing because I tried my best and I can learn something from this experience.”

After this event Chronopoulos began preparing for his next challenge. On August 27th, he played against Grandmaster and Bronx native John Fedorowicz. His preparation for this match included playing chess matches online and studying old games played by Fedorowicz to help him become familiar with his style of play.

Going into the match Chronopoulos stated, “I want to come in with a clear mind, reminding myself that I am going to play a regular chess game, and hope for the best.” He put up a great fight against Fedorowicz, but after having a losing position Chronopoulos resigned on his 40th move.

“The experience was interesting because I tried my best and at the end of the day there is nothing wrong with losing to a professional.” He added, “One of my best moments was taking a picture with John after the match, and he autographed a chess belt that I designed.”

The Chess and Checkers House hosts these chess simul events every summer. Chronopoulos is very optimistic about playing next year. He stated, “I think this is a great challenge; it helps me to better understand the game and I want to learn more. I am excited about the opportunity to take on different Grandmasters every year.

Besides participating in the simultaneous exhibition, Chronopoulos assisted in setting up for the event. Catherine King, Manager of Chess & Checkers House, stated, “I was very happy to see Christopher. He was excited to help us set up all of the tables, chessboards, and pieces. We needed extra hands and he was more than delighted to help.” She added, “Christopher was very appreciative of the Grandmaster taking time to play everyone.”

When asked if is good for avid chess players to play against expert players, he stated, “Yes because you can learn who the grandmasters are, and you can learn lessons and techniques from each expert.” He added, “Do not be afraid because win, lose or draw there is always a lesson to be learned.”