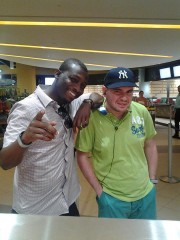 Special Citizens, a New York City nonprofit organization that has been supporting adults and children with Autism for over forty years, will be honoring two JetBlue employees at LaGuardia Airport on Friday, October 9, 2015.

New York, New York, October 7, 2015 (Newswire.com) - Special Citizens, a New York City nonprofit organization that has been supporting adults and children with Autism for over forty years, will be honoring two JetBlue employees at LaGuardia Airport on Friday, October 9, 2015.

Terence Skeete and Veda Simmons are the two JetBlue employees, who through their actions, helped the dreams of a man with Autism come true. Special Citizens has been supporting Daniel for many years in his group home and day program. It has been a long held dream of Daniel’s, to visit and experience Disney World.

Going to an airport can be a daunting experience for anyone. For someone with Autism, that experience can be even more challenging and the staff at Special Citizens wanted to ensure that the process of taking Daniel to Disney World went as smoothly as possible. The staff worked with Daniel and took him to the airport prior to the actual trip so he knew what to expect when the day came that he would actually fly to Florida.

The day of the flight, Daniel and his Behavioral Aid, Ben, were met at the airport by two very special people. Terence and Veda representing both The Transportation Administration (TSA) and JetBlue, ensured that Daniel and Ben had everything they needed to go through security and board the flight without distraction and to deplane the flight in Orlando without hiccups.

“As a result of these efforts, not requested of TSA or JetBlue, Daniel was able to enjoy his flying experience, which lent itself to an awesome vacation in Disney World,” says, Ben Duodu, Behavioral Aid for Daniel.

Special Citizens was so impressed with the above and beyond approach that JetBlue employed in assisting Daniel, the organization will be presenting the two employees with tokens of their appreciation at the JetBlue terminal this Friday.

“They may have just thought they were doing their jobs. They may not have thought about the impact their service would have, but what they did for Daniel is the highest form of selflessness and accommodation, and we applaud Terence and Veda both personally and professionally. It is because of these two employees that Daniel was able to realize his lifelong dream of going to Disney World and it is our honor to publicly acknowledge them and their efforts,” says, Jessica Zufall, Chief Executive Officer of Special Citizens.